As promised last week, in today’s show my guests will discuss US feminists’ role specifically in Afghanistan and more generally in US foreign policy, which has wreaked havoc everywhere and materially benefited elites in the US and worldwide.  There is lot of coverage now about Afghanistan, Afghan women, "feminists" supporting invasion, etc., but very little about the role of US-based feminists in opposing US foreign policy regarding Afghanistan and more generally. I also want to point out how the crisis in Haiti, another country where US policies over the decades have resulted in horrific conditions there, has dropped off the news. Not surprising.

My guests join me today to engage the following questions and more: What are/should be US feminists' and women's movements' roles and responsibilities in dealing with the current humanitarian crisis in Afghanistan and in addressing US foreign policy more generally? What must we understand about US foreign policy to be able to be in ethical and meaningful solidarities with feminists around the world? Our conversation will be both historical and aspirational.

We listen first to Phyllis Bennis, director of the New Internationalism Project at the Institute for Policy Studies in Washington DC focusing on Middle East, U.S. wars and UN issues. This clip is taken from a CODE PINK webinar Afghanistan: Who’s to Blame and What Next? held on August 16. Special shout out to Madison Tang and Code Pink for this contribution to our show. You can find the link to the full recording by clicking on the link below.

Ann Wright was in the US Army/Army Reserves for 29 years and retired as a Colonel.  She was a US diplomat for 16 years and served in US Embassies in various locations around the world including Afghanistan.  She was on the small team that reopened the US Embassy in Kabul, Afghanistan in December 2001 and stayed 5 months.  She resigned from the US government in March 2003 in opposition to the US war on Iraq.  She returned to Afghanistan many times after she resigned from the government.  She has traveled to other notable places on the US foreign policy landscape including Iran, Pakistan, and North Korea as a citizen diplomat.

Cindy Clark is a US-based feminist and current Co-Executive Director of AWID, a global feminist membership organization committed to supporting women’s rights and gender justice movements to thrive. She has over 20 years of experience in various organizations doing advocacy, strategizing, and organizing to advance women’s human rights.

Charlotte Bunch is Founding Director and Senior Scholar, Center for Women's Global Leadership Rutgers University. She has been has been an activist, writer and organizer in feminist, LGBT, and human rights movements for over four decades.   She has been involved in many civil society efforts at the UN, including advocating for women’s rights as human rights, organizing at the UN World Conferences for Women from 1975-95, and advocating for the creation of UN Women.

Action: Starts 1 September! Use hashtags ONLY FROM THEN! 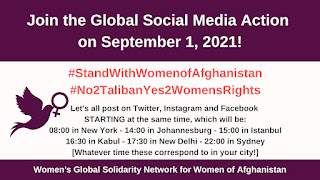 Code Pink Radio "Afghanistan: Who's to Blame and What Next?

Sweet Honey in the Rock "Study War No More"