Monday, April 12, 2021: Women and Youth Fighting for Democracy in Myanmar

On February 1, the Myanmar military attempted to carry out a coup against the country’s civilian government. Since then, until now, massive numbers of people, from across the country and from various ethnicities and classes, have been protesting, striking, and using  other forms of civil disobedience to resist this attempt.

The Myanmar Army,  known as Tatmadaw, has deployed brutal force to suppress dissent, killing over 600 people, at least 46 of them children. In the face of this violence,   strong solidarity is emerging between the various ethnic groups, who have been victimised by the Myanmar military for decades and make up almost a third of the people in Myanmar, and the Bamar majority. This solidarity is very significant in a country that still suffers from the divide and conquer strategy used by the British who colonized Myanmar in 1824 and imposed ethnic categories and hierarchies. One of the distinct features of the growing democracy movement is the visibility of youth leaders, many of them women.

Today, Margo Okazawa-Rey discusses the Myanmar women’s movement and its role in current resistance to attempted coup in a recorded interview with Debbie Stothard, a feminist human rights advocate and educator. In 1996, she founded ALTSEAN-Burma to develop innovative human rights training and advocacy programs to support human rights and democracy in Burma/Myanmar. 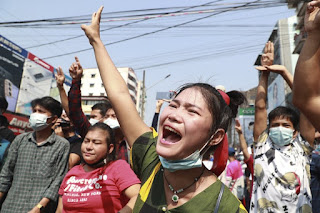 Posted by KPFA Womens Magazine at 10:47 AM