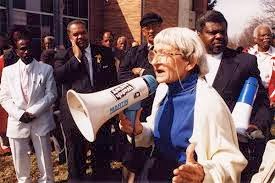 In “Letter from Birmingham Jail,” Dr. Martin Luther King, Jr. described Anne Braden as a white southerner whose rejection of her segregationist upbringing was “eloquent and prophetic.” When charged with sedition for attempting to desegregate a Louisville, Kentucky neighborhood in 1954, Braden used the attack to embark upon a lifetime of racial justice organizing matched by few whites in American history. Ostracized as a “red,” she fought for an inclusive movement community and demonstrated that civil liberties were essential for civil rights. After decades of being shunned by even the most progressive organizations, in 1989 Anne Braden was awarded the first Roger Baldwin Medal of Liberty from the American Civil Liberties Union as a “lifelong leader of the movements for racial justice, labor rights, and peace in the South.” 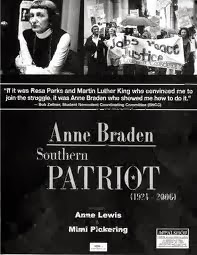 Now an extraordinary film by Mimi Pickering and Anne Lewis of Appalshop brings Braden's work and voice to life.  Braden's own words are mixed with powerful images from the civil rights era and beyond, and those whose lives entwined with hers talk about her influence on them and their struggles for justice.

In this fund drive special, hosted  by Margo Okazawa-Rey and Kate Raphael, we listen to excerpts from the film.  We also speak with Molly McClure of the Catalyst Project and its Anne Braden Political Education Program, about how Braden's work has inspired a new generation of white anti-racist activists.

Listen to the show

It's still fund drive so please pledge your support to KPFA! For $100 or more, you can get a copy of this wonderful DVD to enjoy and share.
Posted by katinsf at 10:17 PM